Today, I’m featuring Hold On! by author Peter Darley, which was released this past summer.  After I watched the book trailer and read the excerpt, I knew for certain, I wanted to read this book. Darley promises romance and plenty of suspense to keep readers engaged. Part of the book tour includes a giveaway for  an Amazon gift card, so don’t miss your chance to win.

Hold On! by Peter Darley 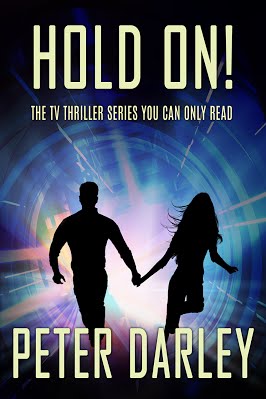 Two lovers! A deadly conspiracy! A race to freedom!

When Carringby Industries, a government-contracted arms manufacturer, is raided by what appear to be terrorists, the CEO’s secretary, Belinda Reese, is rescued by Brandon Drake, a dashing young AWOL soldier. Using an experimental test aircraft, he flees with her to his remote, isolated cabin in the mountains of Aspen.

While assisting in the design of military weaponry, Brandon discovered a plot within his own government to attack its own facilities, under the guidance of immoral politician, Senator Garrison Treadwell. Belinda’s body was not found among the dead at Carringby Industries, and Treadwell suspects that Drake was responsible for rescuing her. In an effort to entrap him, Treadwell arranges for an all points bulletin to be placed on Belinda.

Deeply in love, Brandon and Belinda attempt to escape from America, only to endure one harrowing experience after another as they try to evade and expose Treadwell’s corrupt faction.

But on the run, with danger around every corner, Brandon makes a discovery so devastating that it shatters the very foundations of his reality.

END_OF_DOCUMENT_TOKEN_TO_BE_REPLACED

Shattered Embrace is on my TBR list because it promises to provide a heartfelt look into an adoption process and the realities, both joyful and heartbreaking of bonding with the child once the paperwork is complete and the assimilation process has begun. Read an excerpt and enter the giveaway for a chance to win a $10 Amazon Gift Card.

Bethlehem took her first breath as her mother took her last.
Left to survive in overcrowded Ethiopian orphanages, she developed survival skills rivaling a warrior – a fierce, independent fighter before she could walk or talk. As she approached her second birthday, Bethlehem lived her days guided by two rules: everyone leaves and trust no one.
A world away in Canada, Tory Witcraft is trying to adopt from Ethiopia with her husband, Matt, when her adoption agency goes bankrupt, threatening her dreams of becoming a mother. Against the advice of many, including government officials threatening to revoke the adoption, she goes to Ethiopia, and her new daughter, Bethlehem.
When they finally meet, both mother and daughter struggle to connect, each trapped by their own fears and demons. Emotions and tempers run hot. Hearts and dreams collide, shattering a family before it could fully form.
The adoption journey was difficult, but no one expected the hardest part of the journey would begin once they met.
END_OF_DOCUMENT_TOKEN_TO_BE_REPLACED