Jami Gray released Hunted by the Past, the first book in her new paranormal romantic suspense series this summer.  Since I’m an avid reader of both the paranormal and romantic suspense genres, I’m looking forward to checking out this new series. Today, you can read an excerpt from the book and enter the giveaway for one of three ecopies of this book and a giftcard.

Hunted by the Past (PSY-IV Teams # 1) by Jami Gray 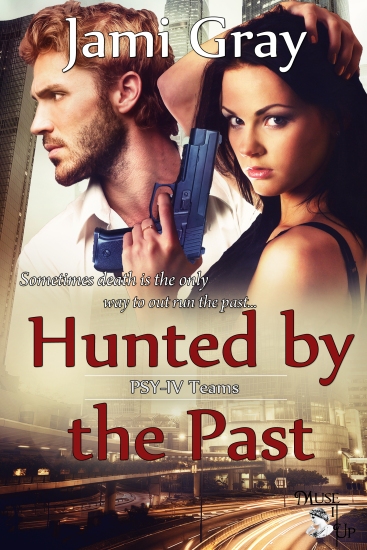 A reluctant psychic who can relive the past, a man well versed in keeping secrets, and a psychopathic killer enter a deadly game where the past determines the future.

Changing the past is an impossibility ex-Marine, Cynthia “Cyn” Arden, understands all too well. Struggling in the aftermath of a botched mission, which cost her two teammates, her military career, and a fledging relationship, she’s brought home by a panicked phone call.  The psychic killer behind her nightmares has escaped military custody to hunt down the remaining teammates, one by one. Next on his murderous list–Cyn. Her only chance at survival is to master the psychic ability she’s spent years denying.

The killer’s game brings her face to face with the one person guaranteed to throw her off kilter—the unsettling and distracting man she left behind, Kayden Shaw.  Once she believed he’d stand by her side, until he chose his job and his secrets over her.  A choice that’s left the scars of the past etched deep on her mind and heart.

To survive this twisted game, Cyn must risk trusting her heart and accepting who and what she is, or lose not only her life, but the man she loves.

My head pressed against my knees, while my arms wrapped around my shins, holding myself together so I wouldn’t shatter into unrecognizable pieces. I squeezed my eyes shut, gasping against the heavy, hot air. God, it hurt. So much so, I wanted to scream. But I couldn’t. Screaming would solve nothing. It wouldn’t bring Kelsey back. Wouldn’t chase Ellery back into hell where he belonged. Wouldn’t make anything right. Instead I had to suck it up and play Ellery’s sick game. And now he had Kayden in his sights.

I have no idea how long I sat there lost in the unlit spaces of my soul. There were lines I’d told myself I’d never cross, but at this particular moment, when grief and rage combined into an unforgiving storm, I would have crossed every single one in exchange for Ellery’s destruction. Options I would have never considered played through my mind, tempting me to step a little deeper into the shadows. It wouldn’t be hard. I’d learned quite a few things in the military.

The sound of my name snagged me from tumbling over into the moral abyss. A touch stroked over my spine, stopping the unconscious rocking motion I’d adopted. I blinked my eyes open, only then noticing the tears weighing down my lashes. Kneeling next to me, Kayden, face etched with concern, eyes watchful, waited until I focused on him. “Don’t.”

“Don’t what?” My question came out hoarse.

I held his gaze, unable to answer, not caring how eerily well he read me. Part of me didn’t give a damn anymore, too much rage, too much guilt, too much pain; all of it coalescing together until it swallowed me whole.

He reached out and brushed away the lingering tears. “You take that road and you’ll lose Kelsey forever.” He curved his palm against my cheek. “You’ll lose yourself, and then he’ll have won. The price is too steep.” There was no judgment in his voice or his expression. Instead a hint of some hard-won knowledge resonated through his words like a bell, spreading until they chased the whispers of vengeance leading me toward the edge.

“I’m not sure I care anymore,” I whispered, meeting his gaze without flinching.

“You care or you wouldn’t still be here.” He watched me. Under any other circumstances I’d be dodging the intense eye contact we shared, but at this moment, I feared the loss of it would send me tumbling into the yawning pit before me.

Jami Gray is the award winning, multi-published author of the Urban Fantasy series, The Kyn Kronicles, and the Paranormal Romantic Suspense series, PSY-IV Teams.  Her latest release, SHADOW’S MOON (5/14) was a Golden Claddaugh Finalist, and the first in her newest series, HUNTED BY THE PAST, hits shelves in July 2014. She is surrounded by Star Wars obsessed males and a male lab, who masquerades as a floor rug as she plays with the voices in her head.

Purchase Hunted by the Past

Amazon Hunted by the Past: PSY-IV Teams

RUNNERS UP:  3 – digital copies of Hunted By The Past