If you don’t think insurance fraud is interesting, then you haven’t read Jennifer Becton’s Southern Fraud Thrillers. Becton revs up the mystery and suspense when she takes us behind the scenes of this engrossing occupation with the heroes of the series,  State Fraud Investigators, Julia Jackson and her partner, Mark Vincent.  Set in fictional Mercer, Georgia, you can follow Julia and Mark as they identify and track down the culprits behind some perplexing insurance fraud cases that will easily keep you engaged and sometimes dumbfounded at the lengths some people will go to to in trying to deceive their insurance companies.

Here is how Becton defines the series:

“The Southern Fraud series is essentially a crime dramedy like Castle or The Mentalist. Add to that some action, a dash of Southern charm and a hint of romance, and you’ve got the Southern Fraud Series. If you like comedic mystery novels similar to those by Janet Evanovich (without as much slapstick humor) or crime dramedy TV shows, you’ll probably enjoy Southern Fraud.” (from: http://www.jwbecton.com/#!about)

In each novel, Julia and Mark are given a potential fraud case to investigate and solve over the course of the book. Interwoven into each plot are the ongoing story threads that take us into the personal lives of the hero and heroine both revealing their motivations for working in this field and exposing their vulnerabilities. Both of these characters are well-rounded, flawed, just as people we may know in real life, and it didn’t take me long to connect with them and want to know more about their backstories.  Both Julia and Mark are focused on the job they are hired to do, but the subtle chemistry between them had me keeping my fingers crossed from the end of the first book, hoping something stronger than friendship might form between them, and at this point, well I’m beginning to smile.

I’ve read the first three installments, and Becton has recently released Moral Hazard, the fourth book in this great series with a dynamic hero/heroine, baffling cases, and storylines that include a cast of dangerous and quirky characters who add a touch of humor, all factors I appreciate in a good mystery. 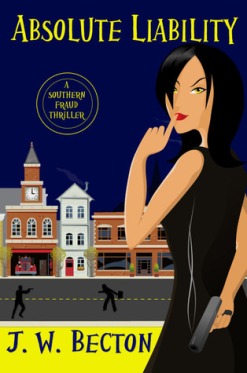 Meet Julia Jackson. Apparently, she’s been abducted…. A woman is taken at gunpoint from the downtown office of Southeastern Insurance, and the police believe the victim is Special Agent Julia Jackson. Only it isn’t true. Now, with the help of her new partner Mark Vincent, state fraud investigator Julia Jackson must find justice for the woman who was taken in her place. As Vincent and Julia begin to unravel the multimillion-dollar frauds that led to the abduction, they encounter a cast of quirky characters, one of whom will go to desperate lengths to hide a deadly secret. Things only become more dangerous as bodies begin accumulating around town, and Julia must discover the truth before the abductor comes to rectify his mistake.Absolute Liability is the first in the six-book Southern Fraud Thriller series, which blends suspense, humor, and Southern charm with just a touch of romance. If you enjoy reading humorous mysteries or watching TV crime dramedies like Castle or The Mentalist, you should like Absolute Liability.