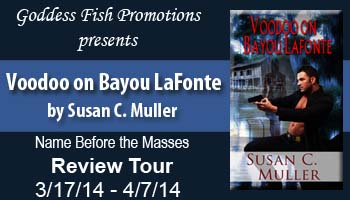 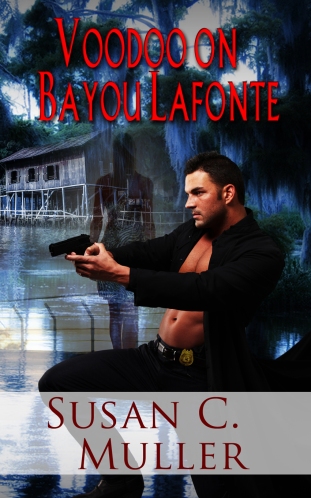 A frantic phone call leads Detective Remy Steinberg racing through the night toward the one place he vowed never to return. With the life of his kidnapped daughter at stake, he willingly faces shotgun-wielding drug dealers, corrupt law-enforcement officials, and a raging hurricane.

Scouring the seedy back alleys of New Orleans for information, he goes undercover at a sinister voodoo ceremony, and struggles to understand the forces of black magic that hold his daughter hostage.

With time ticking down, he battles for his life against a high voodoo priest, but can he face the two things he fears most: the swamp that terrorized his childhood, and the ex-wife he’s never stopped loving?

Voodoo on Bayou LaFonte is an engaging read from start to finish. Muller takes readers deep into the alligator infested swampland of bayou country, where Remy and his ex-wife desperately search for their teenage daughter who has mysteriously disappeared. Set in a rural Louisiana parish richly steeped in culture, heritage, and superstition, the locale itself is filled with conflict and described in such rich multisensory detail that it becomes a complex character in and of itself, welcoming in some ways and antagonistic in others.

Houston Homicide Detective Remy Steinberg loathes returning to Louisiana, the home he left behind years ago that holds nothing for him now but memories of bitterness and regret. Although the bayou will still prove to be a hindrance in his quest to find his daughter, Remy will also discover that this place still has a strong hold over him as well. During his stay with his ex-wife Gabby, he is reminded of all the good times he and Gabby shared, and he realizes that although he physically left the bayou behind, his heart has always remained here with Gabby and his daughter, Adrienne.

The contention between Gabby and Remy is thick when they reunite, and it becomes clear very quickly why their marriage failed –the lack of clear communication combined with Remy’s stubborn pride and Gabby’s quick-temperedness. Once they begin their joint search, they realize they must work through their issues if  they are to make any significant progress in finding Adrienne. Both behave in some pretty frustrating ways at times, so that I can understand why they couldn’t always get along. However, unlike before, this time, they cannot just go their separate ways, not until they get Adrienne back.  Despite their communication problems, the love between Remy and Gabby still lingers, and as their partnership becomes stronger, so does the intimacy between them. Their rekindled romance is mildly sensual, and the details of their love scenes are not graphically depicted. The emphasis is more on Remy’s and Gabby’s feelings and emotions rather than the physical connection.  One of my favorite quotes is Gabby’s description of seeing Remy again after so many years:

“If he’d looked yummy at eighteen, now he looked like lobster bisque, filet mignon, and bread pudding with bourbon sauce, all rolled into one.”

How can you not like a gal that makes such a great comparison?

Gabby and Remy’s relationship never overshadows or detracts from the novel’s main plot focus: to find Adrienne. In fact all of the story threads – dark voodoo practices, illegal drug running, corrupt police officials, and swampland predators are smoothly entwined to create a well-executed plot filled with danger and suspense. The story has a clear and satisfying  resolution that I must admit also left me with a craving for a big bowl of spicy Jambalaya!

Source:  I received a complimentary copy of this book in exchange for an honest review.

Remy gritted his teeth and turned off his flashing light bar as he crossed the state line. His badge might carry some weight in Texas, but not in Louisiana. Those guys resented against everything from Texas except the money that rolled in.

Well, too bad. He felt the same about their whole state. Had since the day his mother dragged the family there from New Jersey.

He understood, forgave her even. When his father died, she needed someplace that felt like home. Only it never felt like home to him. In fact, it felt more like purgatory. And he got out of there as fast as he could.

Unfortunately, that meant dragging Gabrielle and Adrienne to Texas with him. And Gabby had refused to do that. She’d given him an ultimatum. Come back or get a divorce. Well, he’d never much liked ultimatums. And he sure didn’t plan to ever live in that state again.

He’d gone to Texas in search of work, sure that if Gabby loved him enough, she’d follow. Only she hadn’t, and he’d refused to give up a good job and return to a hand-to-mouth existence, sponging off of family, and feeling like a failure because he couldn’t support his new baby and his wife.

The same wife who hadn’t loved him enough to come with him.

His hands tightened on the wheel until his fingers went numb. Would things have been different if he hadn’t been so bullheaded? Was Adrienne paying the price for his stubbornness?

He could beat himself up later for rash decisions. All that mattered now was his daughter’s safety.

And every minute that passed, the knot in his gut grew.

He stopped for gas, a quick burger, and to study the map. Nothing had changed. A few more fast-food joints, a few more casinos. But the swamp was still only feet off the road in places.

Another hour of driving, and he turned off the interstate, into bayou country. The lights fell away and he was left with only his headlights poking a hole in the darkness. Even the air felt heavy, like the weight on his shoulders.

How he hated this place. And now it had taken his daughter. 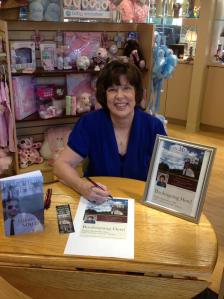 Susan C. Muller is a fourth generation Texan. She attended Stephen F. Austin State University where she majored in Business Administration. She started her first novel at age eleven, but it wasn’t until after she had worked many years and raised a family that she returned to her first love, writing. She is a member of Northwest Houston RWA, Kiss of Death online RWA, and The Houston Writers Guild. Her novel, The Secrets on Forest Bend, has won several awards.

Susan and her husband, Sid, live in Spring, Texas with their rescue dog, Buster, a 120 pound black lab of advanced age. They have two children and four grandchildren. They love to travel and have been fortunate to see much of the world. Her favorite places include Kenya, New Zealand, and the Galapagos Islands. When not writing, she can be found doing volunteer work at a local hospital. She loves to read, travel, snorkel and take long walks.

Follow the tour and continue to comment to improve your chances of winning! The tour dates are here:

Other Books by Susan C. Muller that might interest you. The heroes of these novels also play a role in helping Remy find his daughter, and their stories are told here –

(Click on the book cover pic  to learn more)

Another day. . . another dead body.

When Detective Adam Campbell learns that a WWII gun is connected to several murders he’s investigating, he hopes that tracking down the killer will be as easy as tracing the gun’s history. When he meets Jillian Whitmeyer, the last known owner of the weapon, the case becomes anything but simple.

Adam soon learns that people who get close to Jillian have a bad habit of turning up dead. Jillian claims that the spirit of her sister, accidentally killed with that same gun, is responsible for the deaths. She warns Adam that he is likely to become the next victim. Adam’s been a lousy judge of women in the past, and this one’s obviously a nut case. Or is she? How does a just-the-facts detective deal with a ghostly serial killer and the sexy-as-hell sister she won’t set free?

A powerful psychic is brutally murdered. Secrets are revealed. An old enemy is out for revenge.

Detective Ruben Marquez is thrust back into his childhood memories when he investigates a gruesome murder that occurs only feet from his mother’s home. Is the killer somehow connected to his own past? Is the beautiful, mysterious daughter of the victim, someone he can trust? Or is her revelation that she’s a witch a sign he should stay clear. But how can he, when it appears she’s next on the murderer’s to-do list?

In the ultimate test of courage, he uses himself as bait to protect all he holds dear . . . his career, his family, and the Witch on Twisted Oak.