Beg Me To Slay by Lisa Kessler 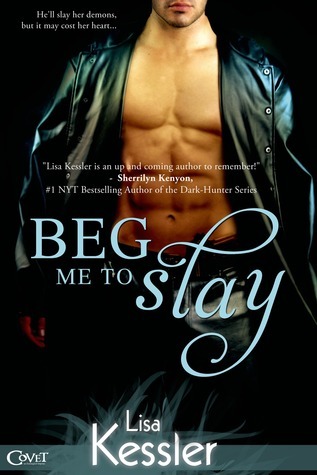 He’ll slay her demons, but it may cost her heart…

Four years ago Tegan Ashton was attacked. Determined never to be a victim again, she devotes her life to martial arts and self-defense. When her assailant returns to finish what he started, only one person can help her.

Gabe is a private investigator by day and demon slayer by night. After losing loved ones, he vows to defend people from a threat they don’t realize exists.

The relationship is supposed to be strictly business, but fighting demons together stirs up emotions they never expected. Turns out demon fighting is a breeze compared to facing their scarred pasts and even worse – hearts.

Beg Me to Slay is a wonderful well-written paranormal romance between two individuals who could easily have been broken by the supernatural forces that have invaded their lives, but who choose to fight to reclaim their lives, and along the way find a love that can triumph over any demons who try to destroy them.

Tegan is a heroine I can admire. She has worked hard to put her life back together after a strange attack four years ago shattered her sense of reality and left her not only physically scarred but questioning her sanity as well.  Instead of giving in to the fear that could easily have consumed and paralyzed her, Tegan refuses to be victimized ever again by earning a black belt in Karate and opening a dojo. Although she’s come a long way in healing, it isn’t until she meets PI/paranormal investigator Gabriel “Gabe” Smith that she realizes she still hasn’t been fully living her life.  Their paths cross after she unexpectedly discovers that her attacker, the strange man with the glowing eyes and pointy teeth, is nearby. I like that Tegan goes on the offense by hiring Gabe to find this man before he can come after her again.  Over the course of the book, she proves not only to herself but to those around her how strong she can be, and watching her face her “demons” head on is inspiring. Tegan is a real “kick ass” heroine with the skills and confidence to face the oncoming perilous situations headed her way.

Gabriel is a multi-faceted character and one of the few able to get past Tegan’s emotional defenses and sometimes prickly nature with his charm and teasing personality, and he is able to bring out the playful side of Tegan that she thought long gone. It also doesn’t hurt that Gabe is easy on the eyes. This handsome demon slayer has super fighting capabilities, unusual healing abilities, and the experience to survive in the hidden world of demons living in the human realm.

After Gabe takes one look at Tegan’s scar, he realizes she was bitten by a demon and, somehow, miraculously survived her attack. However, he also knows this demon will continue to search for her and is determined to protect her at all costs. He finds Tegan attractive, intriguing, and watching her in fight mode is a big turn on for him as well. However, Gabe is carrying around his own emotional baggage and experience has taught him not to get close to others or their safety will be jeopardized. Despite how cautious both he and Tegan are in guarding their hearts, the sexual tension builds between them until they can no longer resist each other, and what starts out as a business partnership gradually evolves into so much more than either ever expected.  Kessler has just the right amount of sexual tension that isn’t dragged out for too long, and she writes some seductive love scenes that aren’t overly graphic.

The novel’s plot is creative and well-executed, unpredictable in many aspects and contains some incredible surprises. I appreciate how Kessler ties together all the story threads so effectively.  Gabe and Tegan face one mounting conflict after another and the drama never stops. If you enjoy paranormal romances, I encourage you to check out Beg Me to Slay which is an engrossing read all the way to the end.

I received an ARC of this book from the author for an honest review.

Lisa Kessler is an award winning author of dark paranormal fiction. Her debut novel, Night Walker, won a San Diego Book Award for Best Published Fantasy-Sci-fi-Horror as well as the Romance Through the Ages Award for Best Paranormal and Best First Book.

Her short stories have been published in print anthologies and magazines, and her vampire story, Immortal Beloved, was a finalist for a Bram Stoker award.

When she’s not writing, Lisa is a professional vocalist, performing with the San Diego Opera as well as other musical theater companies in San Diego. You can learn more at http://Lisa-Kessler.com

Ecopy of The Moon series

4 comments on “Book Tour for Beg Me to Slay: ARC Review & Giveaway”