Visions of Fire & Ice: A Petiri Book  by Teresa D’Amario 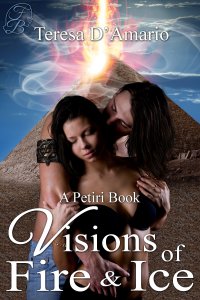 Trapped on a planet not their own, the Petiri spend their lives hiding the natural gifts that set them apart from the world. They live long and unfulfilled lives, unable to find their soul mates on this backward planet known as Earth. That is until the night Ramose comes face to face with Tamara, a woman whose gifts rival his own. Determined to find why this human is in possession of an ancient magical Petiri relic, he arranges a meeting.

But Tamara, embittered from past events, is wary despite lifelong dreams of Ramose and a sure knowledge he is her soul mate. Before long the couple find themselves ensnared in a battle that has raged for millennia in Egypt’s desert. Set, Egyptian God of Chaos, is determined to take his just due: the throne of Osiris.

The only way to stop him is for Ramose to put his trust in Tamara, but, first, he must gain the same from her. The ensuing sensual relationship is filled with romance, lust and love. Their relationship is tested by an unnatural evil. Will her powers over fire, combined with his ice be enough to win the day? Or will the ancient gods and goddesses of Egypt destroy more than just their love?

Born in Atlanta, the daughter of an Army Soldier during the early stages of the Viet Nam war, I spent my childhood traveling from state to state, finally ending up overseas in Germany where I graduated high school six months early.

My writing career however began as a young Airman in the Air Force, writing monthly articles for the weekly base paper.  The articles ranged from climatological data to full center fold articles on the destructive forces of hurricanes.  As I increased in rank, my writing changed to more technological instruction, including such works as  WSR-88D Doppler Radar Data Interpretation Guide for North Carolina Stations, and Station Operating Procedures.

But my early writing wasn’t limited only to the technological side.  I’ve written multiple dog training and behavior articles for canine websites such as Sonora Canine Freestyle, and also the Ask Blackjack column, a fun training column in the voice of my labrador retriever, then a young pup.

I’m married to a wonderful man named Doug, who is also retired Air Force.  We live in North Carolina with our two dogs.

A big thank you to Teresa for taking time to share more about herself and her work!

What is your writing environment?

Sitting in bed, listening to movie music, with grapes at my side.  Grapes are one of my favorite snacks, because it doesn’t mess up your hands, takes the place of needing a drink, and if fresh, give you that nice, sweet crunchy texture.

Who is your perfect hero/heroine? Why?

My most favorite hero of all times is Rhage from JR Ward’s Eternal Lover.  I think it’s because he seems so “human”.  He may be strong and powerful, but inside, he’s a hurt little boy, and I really do love that in a hero.  I haven’t quite pulled off the “hurt little boy” quite as well as she has, but it’s one of my goals.  I’m hoping in book 2 of the Petiri I can do that, because my hero there was inspired in my dreams by Rhage, I think.  He’s not Rhage.  He doesn’t shape shift into a dragon, but he holds in a lot of pain that is almost child-like in his anger, and seems to have a lot of the same type of insecurities caused by his past.

Which authors have caught your interest lately? Why?

This is a difficult question, because I don’t get to read nearly as much as I would like to these days.  I’m afraid the “evil day job” gets in the way.  When I get the chance to sit and read, I’m busy playing catch up on series.  I’ve just recently read “One Lucky Vampire” by the indomitable Lynsay Sands.  Nobody does vampires like her, and I love them.  And it has nothing to do with the fact that she and I share a birthday! (well the date, not the year).

What type of book have you always wanted to write?

Paranormal or Science Fiction, which is awesome because Visions of Fire & Ice is a little of both.  I always tell people I spent way too much time as a kid watching Dark Shadows and Star trek.  Putting the two together is a lot easier than people realize.

1.  Go to Italy, and find some of the Italian family for real (Only problem is I don’t think they speak English).

2.  Return to Egypt when I have time to tour all over everything.  The next time I want to make it down to Alexandria, and then spend at least a week lost in the antiquities museum.

3.  Get a CanAm motorcycle (yes, that’s probably the only one that will happen of the three. LOL)

How did you get the idea for this particular novel?

I’m not sure. I was trying to create my own race, and it just flew out.  I even told Ramose I didn’t WANT aliens, I wanted paranormal, and he refused to go away.  The book’s plot more or less wrote itself, as soon as the villain came on the scene.  Having been to the hotel in question, I could see him taking the stairs in the foyer, and heading to where the hero and heroine were.  His personality was so strong I had to change the entire course of the book.

What is your favorite scene in your newest release?

It would have to be the belly dance scene, when Tamara takes control of their relationship and ignores her fears.  She’s had a difficult past, and thinks that Ramose will not want her if she continues to give in to those fears.  She’s not much into the sexual scene, and he’s all raring to go.  Taking that one step is the hardest thing she does in the entire book.  And one of the hottest.

What is the last movie you watched and loved?

I guess it would have to be the newest star trek movie.  It’s hard because I see so many movies to chose just one, but Star Trek sticks out to me as being exciting and surprising.  A lot of people don’t like the “reboot” of the series, but I kind of do.  It doesn’t quite stick to Roddenberry’s overall idea, where we as humans become something more emotionally advanced than we are, but it does push us toward something new and exciting.

What would you consider a “perfect date”?

Dinner and a movie – oh wait, that’s  my every date with hubby. 😀  Actually that’s still my favorite date.  I love movies, and I think dinner is a great time to sit and chat.

What are you currently working on?

I’m working on book two in the Petiri series, but it is as of yet, unnamed.  It incorporates demonology, and another, lesser known god from the Egyptian Pantheon.  One known for slitting throats and ripping innards out through the wound.  Very Freaky.  He gives me nightmares, let me tell ya!  I don’t want to tell you more, because it may give away secrets from book 1. J

Amazon: Visions of Fire and Ice (The Petiri)

Digital Copy of SHEWOLF, TIGRESS BY THE TAIL and DARK SUCCESSION by Teresa D’Amario. 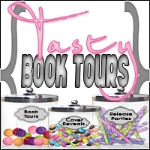