This looks like a great series that I plan to check out in the near future!

More than three thousand years ago Angels saved humanity from destruction, but Earth was lost. The Angels spread humanity across the stars and ruled the universe for twenty-five hundred years. Then they vanished.

Angelolist Rachel Jordan has come to the hellish world of Gehenna in search of a lost relic said to hold all the knowledge of the angels. But other factions seek it for themselves, and religious zealots will stop at nothing to keep it safe.

Echoes of Angels on Goodreads 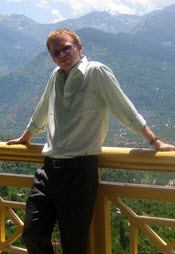 Matt was born and raised in Virginia, and graduated from the College of William and Mary there. His lifelong love of fantasy began with The Hobbit. This led him to start writing his own stories at a young age. His primary influences are mythology and history. He now lives in Florida with his wife.