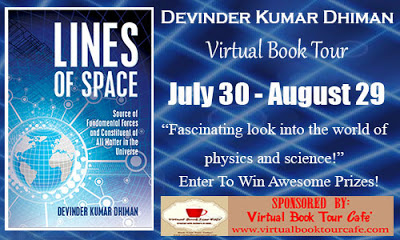 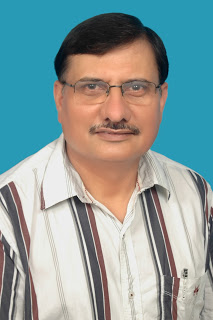 Devinder Kumar Dhiman was born in 1965 in a small town near Chandigarh, in a middle class family. He completed his engineering graduation from the prestigious Marine Engineering and Research Institute in Kolkata. After graduation, he worked as an engineer on ship and also taught science and mathematics to XIIth standard students in a Coaching institute, in between the sailings. In 1997, he got his First Class Engineering Officer license from Directorate General of Shipping of India. After two years, he became head of the technical department of a Norwegian ship plying in international waters and continues to hold this position till date. He works on ship for about six months every year and devotes the remaining time to his interest of physics. He lives with his family in Panchkula- a beautiful town of north India.

‘Lines of Space’ is a unique and interesting approach to creation of matter from empty space. The Author has presented this notion by primarily discussing the established theories of physics in an interactive dialogue with his son in order to simplify them and then comparing them with the new idea of ‘Lines of Space’. The author conjectured that, in the beginning of the Universe, there was dense uniform space which converted into matter by contraction and caused different stresses in the remaining space, which in turn gave rise to fundamental forces. The author developed mathematical formula to find this stress at various locations in the universe and established its relation with cause of Gravitation,bending of Light, expansion of the Universe, Theory of Relativity and creation of subatomic particles. Thus, he has presented in this book, an absolutely new, ground-breaking, plausible and fascinating look in to the world of physics where all matter in the universe is created from space itself and the fundamental forces subsist due to stress in the ‘Lines of Space’.

Space is uniform throughout the universe and all the physical laws and scientific experiments, formulae and theories are based on the assumption that space is uniform. Then another thought struck me, what if space is not uniform, will it then be possible for space to convert into small matter particles on its own due to some natural environmental changes? This answer seemed very unlikely; I did not know what difference a non-uniform space would make. Neither had I any idea how a non-uniform space would look like nor how it would be different from uniform space. May be there would not be any difference, but I wanted to try to find it. So I started on the long and arduous journey of finding the truth about universe.

First, I searched on the internet and I couldn’t find any information on the non-uniformity of space. It seemed as though I was on the wrong track because it is a well-established hypothesis that space is uniform and it appeared that I was just trying to make something out of nothing. But I couldn’t let this idea go as I meditated deeper into it. I had to proceed on this path alone, as no information was available to me. After countless hours of cogitating, I could only envisage that space is homogenous and uniform and that there is no chance that anything could have appeared from space even if it is not uniform throughout the universe.

One fine day, I was wandering about such fascinations lost in my contemplations when my wife handed me a steel bowl filled with milk-cream, thrust a spoon in the bowl, and directed me to keep turning the spoon in the bowl.

“Just keep turning,” she commanded and went to check the washing machine, which was sounding the alarm that the washing cycle is completed and that somebody should come and attend to it.

I followed orders and kept turning the spoon in the milk-cream, which looked homogeneous, and churning it was a futile exercise as far as I was concerned.

After few minutes, I saw some small lumps had started forming in the milk-cream. I continued churning. The lumps started becoming bigger and bigger and I was excited when I saw that the nearly homogeneous milk-cream had separated into two parts: ‘solid’ and ‘liquid’.

“Have you got the butter?” enquired my wife, as she came into the room.

“Looks like it,” I said innocently, not knowing what result she wanted.

She took the bowl, checked it, handed it back to me, and instructed me to keep the bowl in the kitchen. It appeared to me that the mission had been accomplished; she had got what she wanted.

But I was ruminating that I never knew such a simple thing as this that nearly homogenous milk-cream could be converted into butter and butter milk just by churning it vigorously, or maybe I had sighted it but never cared about it. Now, this simple knowledge coincided with my ongoing pursuit of creation of the universe. If practically homogeneous milk-cream could be separated into two parts by simply providing energy to it by churning, why couldn’t the homogeneous space be separated into different parts when energy is supplied or removed from it? Yes, there is a chance that elementary particles, such as electrons or even smaller particles like bosons or quarks, could have been created from space only. There was probably no requirement for the Big Bang; we just needed to know the mechanism that converted space into particles. This conversion looked impossible to me, and the relation of a biological process, such as formation of butter, with the creation of universe did not seem acceptable. Then I supposed there was no harm in trying to investigate further, so I continued my discerning of non-uniform space and one day, I found a way to differentiate between two spaces. For this differentiation, I was required to consider that space contains some medium. I knew that scientists had first assumed the existence of a medium of space when it was thought that light waves required some medium for travelling. Later that theory of medium of space was discarded due to practical observations from the Michelson and Morley experiment. But I opined further that that experiment had only proved that there is no medium of space that changes due to the motion of the earth, but it did not prove that there couldn’t be any other medium that remains unaffected by the motion of earth. So, there is a chance that the medium of space exists.

I had already made two key deviations from the set theories: firstly, that space is non-uniform; and secondly, that it consists of some medium. Let’s see where these deviations can lead us to.

One comment on “Spotlight & Giveaway for Lines of Space”