Christine Amsden has been writing science fiction and fantasy for as long as she can remember. She loves to write and it is her dream that others will be inspired by this love and by her stories. Speculative fiction is fun, magical, and imaginative but great speculative fiction is about real people defining themselves through extraordinary situations. Christine writes primarily about people and it is in this way that she strives to make science fiction and fantasy meaningful for everyone.

At the age of 16, Christine was diagnosed with Stargardt’s Disease, a condition that effects the retina and causes a loss of central vision. She is now legally blind, but has not let this slow her down or get in the way of her dreams. (You can learn more here.)

In addition to writing, Christine teaches workshops on writing at Savvy Authors. She also does some freelance editing work.

Christine currently lives in the Kansas City area with her husband, Austin, who has been her biggest fan and the key to her success. They have two beautiful children, Drake and Celeste. 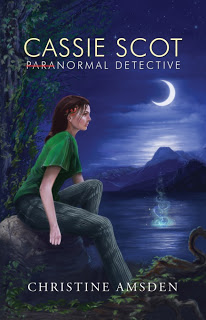 Cassie Scot is the ungifted daughter of powerful sorcerers, born between worlds but belonging to neither. At 21, all she wants is to find a place for herself, but earning a living as a private investigator in the shadow of her family’s reputation isn’t easy. When she is pulled into a paranormal investigation, and tempted by a powerful and handsome sorcerer, she will have to decide where she truly belongs.

Praise for the Cassie Scot Series:

“In this entertaining series opener, Amsden (The Immortality Virus) introduces readers to the eponymous Cassie, a decidedly mundane member of a magical family. …Readers will enjoy Cassie’s fish-out-of-water struggles as she fights magical threats with little more than experience and bravado.”

Kim Falconer, bestselling author of The Spell of Rosette, Quantum Enchantment Series, had this to say:

“When sorcerers call the shots, what’s a girl without powers to do? Get ready for a ripper of a murder mystery full of romance and intrigue, where magic potions bubble, passions spark and vampires are definitely not your friend. Cassie Scot: ParaNormal Detective grabs you by the heart and won’t let go until the very last page. Well written, immersive and unputdownable. This is urban fantasy at its best. More please!”

In fact, Cassie’s story is complete. There are four volumes in the series, all written, all under contract, and all pending release within the next year or so. Each of the volumes is framed by a self-contained mystery, which should give the reader some sense of closure at the end. Personal, romantic, and familial problems remain, however, and these issues are what I think of as Cassie’s story. The first book is about Cassie solving a murder/missing person mystery. The series is about Cassie discovering who she is and what she wants. I suppose that part doesn’t play as well in a teaser, but I think it’s relevant. To some extent, we all strive to figure out who we are and how to accept ourselves. This is never more true than when faced with the disapproval or disappointment of parents – something Cassie knows all-too well.

Cassie isn’t the only one going through a period of self-discovery. To a lesser extent Evan Blackwood is trying to figure out who he is and what he wants. Well, he’s sure about one thing – and if you’ve read the epilogue to book one you know what that is. He’s confused about much of the rest. In stark contrast to Cassie, Evan has a lot of magical power and he doesn’t want to be like his father – using that power for his own wealth/comfort and little else. At the same time, Evan is used to getting his way and he has the power to take most of what he wants. On the surface this may seem like a good thing, but in Secrets and Lies, book two in the Cassie Scot series, he will learn differently. It was a challenge to show him going through this sort of transformation from Cassie’s point of view, but I hope the reader sees it.

When I look at the series as a whole, one of the choices I have often found myself questioning is the use of vampires in the first book. This may seem like an odd thing to say. I mean, it’s urban fantasy. Of course it has vampires! Well…

I didn’t plan to write the first book right away. In those early weeks, I thought I would write a long short story or novella as a sort of proof of concept. There were a lot of important details popping around in my mind – Cassie character, her family, the town, the rules of magic, the love interest – somewhere in the middle of all that I decided to test the waters with vampires because it’s simple. Everyone knows them. They don’t require a lot of thought. I don’t know when they became permanent, but somewhere along the line I knew I was writing a whole novel instead of a short story, and by then the plot had stuck.

Vampires are not at all important to the overall story. It’s not the last you’ll see of them, but they don’t have a huge part to play. If you’re a vampire fan, sorry, but hopefully you love Cassie enough to stick with her. Those who are sick of vampires in fantasy, bear with me. And know that these vampires are Stoker-esque (and not even a little bit sparkly 🙂 ).

“There is nothing so evil in the world as what humans can do to one another.” – Edward Scot (Cassie’s father). This may have almost seemed like a throwaway comment in book one, but it wasn’t. It definitely becomes important later on, and it’s something I firmly believe. I’ve never thought fantasy novels needed literal demons to fight. Give a human being power, and let’s see what he decides to do with it. History has shown us that it isn’t always pretty.

The last time I revised the first book in this series, I had completed the final volume. This means that I had my plan fully formed and implemented. There are a couple of little things in the first book that you probably won’t even think about unless you go back and reread it sometime after you finish the series. Then you’ll think, “Oh, she did have a plan!”

I love it when authors do that. I hope I’ve pulled it off to your satisfaction as well.

1. Cassie is going to learn something very important about her mother that she never knew.

2. Kaitlin and Madison will take on bigger roles, and each will develop a problem of her own.

3. Edward Scot (Cassie’s dad) and Victor Blackwood (Evan’s dad) will come face to face. Their mutual enmity will not be in doubt.

4. The reader will learn one more of the reasons why Edward hates Victor.

5. The mystery will be the search for two teenage girls who went missing from a summer camp.

6. The life debt Cassie owes Evan will be a big deal.